Christmas is such an exciting time of the year, but sometimes the stress of the holidays gets too much, creating the need to get away and unwind in a winter wonderland break. However, Christmas time also brings financial stress, leaving spending money on holidays is limited. That’s why we’ve put together a list of the cheapest Christmas breaks so that you can enjoy a Christmas retreat without the worry of spending too much!

Because long-haul flights are typically more expensive than domestic, regional, or short-haul flights, we’ve split the destinations by region so that you can plan your Christmas vacation around cheaper flights. Alternatively, if you really want to travel to a winter break halfway across the world, you can make it possible with one of our finance options, which makes flight prices more manageable with monthly installments.

Europe is well-known for its impressive Christmas markets, but it’s equally known for being expensive. Luckily, there are certain gems such as Riga, which offer an extremely cheap getaway, without missing out on any of the Christmas magic. This Latvian capital offers many Christmas delights, including the three impressive Christmas markets in the city center, offering Latvia’s traditional take on a European market with huge Christmas trees, wooden stands offering Glühwein and hot chocolate, and handmade tree ornaments or children’s toys. There are many great flight prices from destinations across Europe, and the value for money once there is also great, with an average weekend costing under £250 GBP including flights, accommodation, and food and drinks. 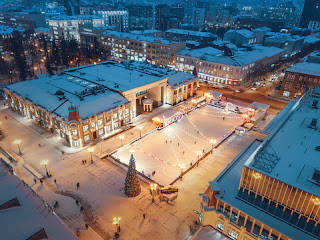 Take me to Riga

Riga International Airport (RIX) is the main airport for the Latvian capital. The airport is only a 25-minute journey by taxi or public transport. You can fly to this airport with many airlines such as Wizz Air, Scandinavian Airlines, Norwegian, airBaltic, and LOT Polish Airlines.

Barcelona is a city that provides great value for money for what it offers, with cheap flights there and also cheap food and drink. Due to being home to one of the weirdest yet most wonderful Christmas Markets (thanks to its Christmas mascot) the prices often soar during the peak times of December making it hard to find a cheap deal. If you really want to visit Barcelona during Christmas, consider visiting during January when the prices drop for the shoulder and low seasons. On 6th January, this Spanish city celebrates Three Kings Day with a parade through the city which features magnificent floats of elephants, camels, giraffes, and more, fireworks, cannons, and of course, beautifully detailed costumes! This event means that you can still enjoy much of the Christmas magic in Barcelona, for a fraction of the price than visiting just weeks before in December. Be sure to try the traditional Three Kings Cake (Tortell de Reis) whilst visiting, to get a taste of Catalonian Christmas. 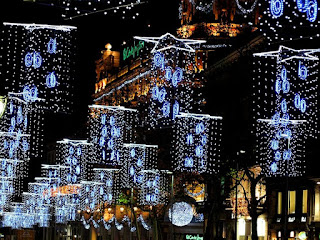 Take me to Barcelona

Barcelona’s main airport is Barcelona-El Prat Airport (BCN). From the airport, it’s only a 20-minute drive to the city center. Fly to El Prat Barcelona Airport with low-cost airlines such as EasyJet, Level, Norwegian, and Ryanair, to help keep costs down.

If a cheap yet traditional European Christmas market is what you’re looking for, head to Krakow for exactly that. Krakow is a cheap destination for a weekend break at any point in the year but has so much more to offer in the lead-up to Christmas. From wandering the picturesque streets in the magical snow, or enjoying some warming delicacies such as hot chocolate or mulled wine at the Christmas market square, Krakow provides everything you need for a Christmas vacation. With flights from many European cities and two nights accommodation in Krakow priced under £150 GBP, this is a bargain that you really can’t miss. In addition, there’s plenty of free things to do in this city, with the market providing plenty of live performances of plays and live music, meaning you can keep the costs down whilst here. 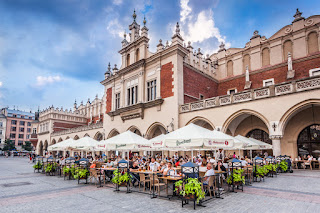 Take me to Krakow

Kraków John Paul II International Airport (KRK) is the main airport of Krakow, located about 40 minute drive out of the city. You can fly there with airlines such as Jet2.com, Wizz Air, and Scandinavian Airlines.

Salt Lake City in Utah provides a picture-perfect Christmas vacation setting, with the snowy Wasatch Mountains in the background, and the brightly lit and magical downtown being center-stage for the Christmas activities in the city. Salt Lake The city doesn’t do Christmas in half measures, with plenty of things to do and see for free — from traditional nativity scenes dotted around the city, to the annual carol service at The Cathedral of the Madeleine, or even the 50-year-old musical held in Temple Square, there’s plenty here to entertain you and get you into the Christmas spirit. 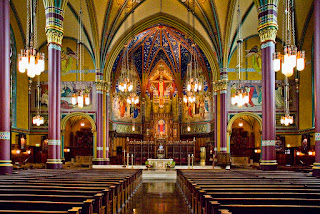 Take me to Salt Lake City

Get to this city by flying into Salt Lake City International Airport (SLC) which is only a 10-minute drive from Downtown. You can get many budget flights to this airport, with airlines such as United Express, Delta, Frontier, and Southwest, making it a great option for American’s wanting a cheap Christmas vacation.

Although the thought of Mexico in December may not automatically scream out ‘Christmas’, this pretty city provides vacationers the best of both worlds for a Christmas break. With December averages of about 26°C, San Miguel is the perfect place to escape the December blues in search of some winter sun. However, that’s not to say you can’t enjoy Christmas festivities in this city. Beginning on 12th December for the Festival of Guadalupe, or Día de Nuestra Señora de Guadalupe, you’ll find celebrations that include fiestas, traditional music, parades, pinatas, and ponche (a mulled fruit drink). Similar events continue throughout December, including Festival de San Miguel, Las Posadas, and Noche Buena (Christmas Eve), meaning whatever time you go in the Christmas period, there’ll always be an event just around the corner to join in the celebrations. Don’t forget to take a break from celebrating, and check out the UNESCO World Heritage site, the spectacular grand churches, architecture, and grand zocalos.

This city is cheap for accommodation, food, and drink, with many cheap flights available from destinations in the USA or domestically within Mexico. What’s more, if you find yourself getting bored of Christmas dinners in December, you’ll be pleased to know that the city is famed for its delicious and exciting food, from salt cod to cochinita pibil (a Yucatan-style shredded pork marinated with orange juice) and other Mexican delicacies. 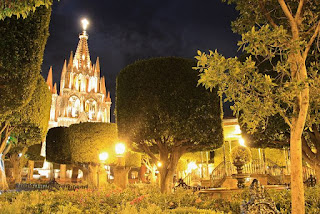 Take me to San Miguel

The closest airport to San Miguel is Del Bajio Airport in Leon. This airport is just over an hour's drive and serves airlines such as Volaris, VivaAerobus, American Eagle, and Aeromexico.

Voted one of the best Christmas destination in the World, Quebec City is an enchanting and magical city during the holidays. Quebec is transformed into a winter wonderland for Christmas, with the obvious German Christmas Market in the city center but also, the quaint Petit Champlain District, which is full of history, architecture, and independent shops, all decorated with twinkling fairy lights. Make sure you take time to go skating at Place d’Youville, where you can go skating with one of the best views of the castle walls. Although Quebec is often considered expensive, you can keep costs down by keeping to free activities, of which there are many. In addition, where this city offers everything you could possibly want from a Christmas break, it means you can do it all in one go rather than going on multiple breaks with the cost of multiple flights and accommodation. 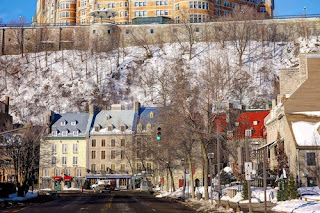 Take me to Quebec City

The closest airport to the city is Québec City Jean Lesage International Airport (YQB) which is only a 15-minute drive to the city center. The airport mainly serves Canadian domestic flights, but also some elsewhere in North America making it a cheap destination for many North Americans. Air Inuit, Air Transat, Sunwing Airlines, Porter Airlines, and WestJet are just some of the airlines that operate flights from this airport. 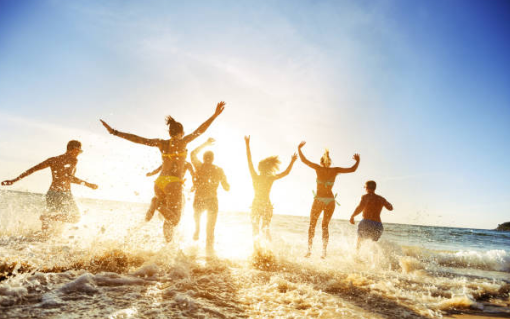 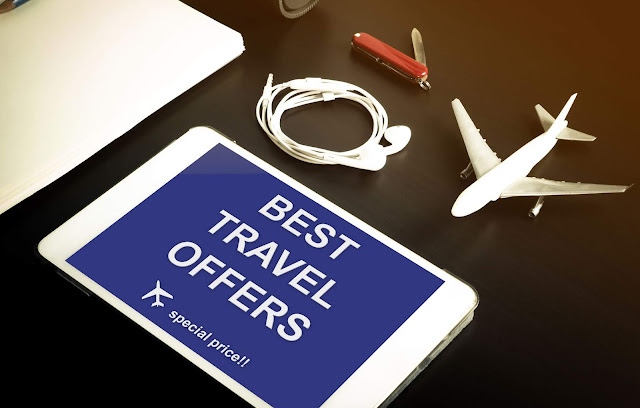 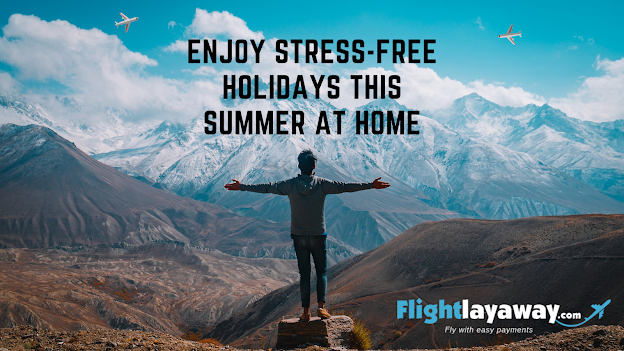